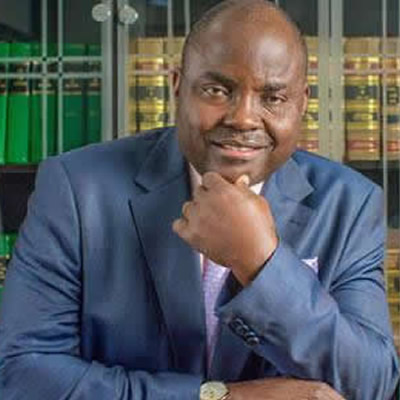 Jibrin Samuel Okutepa is a Senior Advocate of Nigeria, SAN. He is the founding Partner of J.S. Okutepa SAN & Company; a law firm based in Abuja, FCT, with branches in Makurdi, Benue state, and Lokoja, Kogi State, North Central Nigeria. He is a graduate of the Faculty of the Law University of Jos where he obtained his LL.B. (Hons), and was called to the Nigerian Bar on the 12th of December,1991. He is an astute legal practitioner of great repute and industry.

Mr. Okutepa, SAN is a committed and dedicated member of the Nigerian Bar Association (NBA) both at the national and branch levels. He held a variety of positions in the NBA Makurdi Branch from 1993 to 2008. He was the financial secretary, Publicity Secretary, Secretary, and 1st Vice Chairman of NBA Makurdi Branch between 1993 and 2008. He was a member of the General Counsel of the Bar. He was a Member of the National Executive Committee of NBA, from 2004 till 2018.

After several years of distinguished legal practice, he was conferred with the prestigious rank of Senior Advocate of Nigeria, SAN, on the 7th day of July 2011, by the Legal Practitioners Privileges Committee, LPPC,  and sworn in on 26th August 2011 by the Chief Justice of Nigeria. He was the only legal practitioner from Kogi State that was conferred with the rank of SAN in 2011.

Mr. Okutepa, SAN is a recipient of various awards of recognition including the NBA presidential award for meritorious service to the Bar. He is a highly respected authority and conference speaker particularly on Criminal procedures in Nigeria Courts, Litigation, and ethics. He is also a notable analyst and commentator on Legal and National issues and features regularly on invitation by the press.

He has written variously on many issues on law and has contributed to many journals, articles, and published books which are strong reference materials in the Profession.

Mr. Okutepa, SAN’s practice of law has a profound reputation for his doggedness, depth, and demanding qualities. It is because of these qualities and the outstanding demonstration of his value for ethical standards that successive Presidents of the Nigerian Bar Association appointed him the Chief Prosecutor for the NBA at the Legal Practitioners Disciplinary Committee (LPDC) since 2012.

He held the position of Chief Prosecutor for NBA at LPDC between January 2012 and October 2017, before he resigned.

At the International Level, Mr. Okutepa, SAN is a member of the following Professional Associations:

He is happily married to Mrs. Eleojo Toyin Okutepa and they are blessed with Children.

All sessions by JIBRIN SAMUEL OKUTEPA